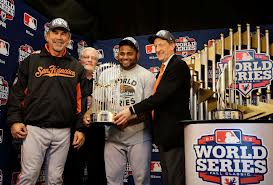 Quick! Before it gets all winter soggy on the West Coast (as soggy as it ever gets in the sun-drenched state), let me close the book on baseball for 2012.
I am a fair weather fan, but MY TEAM WON the World Series! The GIANTS won and it was so much fun to watch their journey, which started in April. Yeah, no, I didn’t watch any games way back in April or even in May, June or July because (see above) I’m a fair weather fan. What does that mean exactly?
That means about mid-August, when I’d log onto my computer in the morning with my wake-me-up, one and only cup of coffee, I might swing by the sports page on MSN and see 1) where the Giants were in the standings and 2) where the Dodgers were in the standings. All Giants fans hate the Dodgers and, even if we’re not doing well, there is some comfort in having the Dodgers not do well, too. You don’t need to be a fair weather fan to know this. I’m sure states that have more than one national team have a similar situation with rival teams.
Anyway, it was back in August when I started to get familiar with the stand-out players:  Posey, Sandoval, Cain. I became interested in their personal information as well as their baseball prowess. Sandoval has a weight problem so I was hooked on him immediately. Posey was a star from the 2010 Series that they won, but he had hurt himself severely in 2011 and was fighting his way back courageously in the current season.
As the Giants continued to pull ahead of the pack (including the Dodgers), they made some critical player purchases and got some great people: Pence and Scutaro to name two. In addition, there was plenty of drama.

On the good side, Matt Cain pitched the 22nd no-hitter in baseball history. On the negative side, Cabrera was suspended for using performance enhancing drugs. [Sidebar: Geez, I wish athletes would quit with the steroid stuff. You’re going to get caught and it really messes with the minds of youngsters who want to emulate you.]

The situation got much more interesting when the Giants found themselves in the playoffs. After ousting the St. Louis Cardinals and the Cincinnati Reds, this fair weather fan started moving appointments and dates around so I could watch the World Series. So, cut to the chase, and you know the outcome anyway; here we are the 2012 World Series Champs…two such honors in three years.
And now it’s over. Another whole year of waiting before the boys of summer return. Kali, my cat, won’t miss this sport being on the television nor our reactions to the highs and lows that disrupted her sleep or kept me distracted enough to forget to feed her momentarily.
In spite of the them being the champs, I won’t tune in to see a Giants game until some Saturday, while flipping through the TV channels looking for something else, I see a flash of orange and black or I hear the announcer’s gravely voice shouting in a home run or stolen base. I’ll think, “Oh, yeah, I wonder where the Dodgers are in the standings.” Being a fair weather fan isn’t a bad place to start.
Like the article? Please share on your social network. 🙂
Twitter Google+ Facebook Reddit LinkedIn Pinterest
« How to be Wealthy
Friends: What kind of a friend are you? »