Does ‘We The People’ Speak for You? 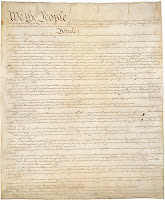 Some people feel the American system of government is broken because of our obsession with Constitutional obedience. I know personally I’ve felt the frustration with recent events such as the fiscal crises and gun control controversies that get bogged down because of feeling shackled to unflinching doctrines that were created in a bygone era.

Some of Our Greatest Leaders Ignore the Constitution

Louis Michael Seidman, in a recent editorial on CBS Sunday Morning and in an article in the New York Times, points out that some of our greatest leaders have been ignoring the Constitution since its inception. John Adams supported the Alien and Sedition Acts, which violated the First Amendment’s guarantee of freedom of speech. Even FDR in his Constitution Day speech in 1937 spoke of devotion to the document, but as a statement of aspirations rather than obligations.

I don’t think we should ignore the whole document. As Seidman states, “This is not to say that we should disobey all constitutional commands. Freedom of speech and religion, equal protection of the laws and protections against governmental deprivation of life, liberty or property are important, whether or not they are in the Constitution.” But here is the most important part of what he says, “We should continue to follow those requirements out of respect, not obligation.”

In the Fall 2010 issue of the Chicago Law School Alumni magazine, David A. Strauss talks about a ‘living’ Constitution, a document that “…evolves, changes over time, and adapts to new circumstances, without being formally amended.” The amendment process is in itself a cumbersome exercise that might have difficulty keeping up with changes over the years. Opponents to the concept of a living Constitution feel this document should be the rock solid foundation of our most fundamental principles and, therefore, should not change and evolve over time.

Shouldn’t We Create guidelines for Tweaking the Constitution?

As our nation has changed so much over the last 2+ bicentennials and will certainly change significantly in the coming ones, shouldn’t we create a document, a standard set of guidelines, that allows for tweaking without a process that pits party against party and sucks the life out of any productive governmental activities? Without changing, the Constitution, I fear, runs the risk of being seen as a relic…a document that over time gets ignored more and more. The issue of who and when the Constitution changes would require a major discourse after all options are identified.

I certainly didn’t intend to present a complete analysis on the longevity of our current Constitution but instead to make us think about change and the possibility of doing things differently and, hopefully, better.

This is Our Country!

Seidman sums up in his editorial, “This is our country. We live in it, and we have a right to the kind of country we want. We would not allow the French or the United Nations to rule us, and neither should we allow people who died over two centuries ago and knew nothing of our country as it exists today. If we are to take back our own country, we have to start making decisions for ourselves and stop deferring to an ancient and outdated document.”

It’s an interesting discussion and I wonder, as “We The People….,” what will happen in the future.

[Note: As this blog post is appearing, PBS has just begun airing Constitution USA with Peter Sagal. In this series, he asks the questions about the relevancy of the Constitution with  residents across America. He probably got the idea from me! The first episode this week dealt with Federal power being the master over state power. Interestingly, we are seeing this exact conflict relative to legalizing marijuana. If you are interested, check your local listings for times and channels.]