All the presents have been opened and are currently claiming space on cleared shelves, in organized closets, on table tops or in drawers. The decorations are down and stowed until next year and some of the leftovers from delicious meals have been pushed into the freezer to be used for soup fixings during the coming chilly weeks.
I’m reflecting; reflecting on what the holidays meant as a whole and how grateful I feel for the bounty of this time with loved ones. The lingering thought at the end of this reflection is about this black, furry, three-legged, slightly skittish present I received nearly three years ago.
One major thing you need to know about me in this, our blog ‘relationship,’ is how I feel about my cat, Kali. It’s pretty unreasonable and can make some of my closest friends uncomfortable. My love for Kali is over the top. I can just look at her and burst into tears. Is this the way it is with children? I don’t know as I never had any. And, come to think of it, it’s not like I birthed her or anything. So why doI feel this hyper level of care and devotion?
About three years ago my friend/neighbor/realtor Robert and I both were in the market for pets. He wanted a doggie and I wanted an indoor cat. We took getting these animals on as a major project visiting every single shelter and Humane Society in two local counties multiple times. Every weekend we’d head out and see who might be out there waiting for us. We did this for two complete months. We each came close to getting a particular animal but, for some reason, never completed the process. Then it happened.

One day Robert found his doggie, Princess, a white bichon frise mix, at the local pound, and two days later I found Ali at the local Humane Society. She was hidden in the back of a small room crowded with outgoing cats. The moment I sat down on the floor, she boldly popped out of the corner and began rubbing against my thigh. It was then I noticed she hopped on three legs. Her rear left flank was shaved where her leg had recently been amputated.

She seemed starved for attention. Although somewhat shy about letting me get too close, she obviously couldn’t get enough of the feel of my thigh smashed up against her sweet face, as she rubbed and purred against me. I found out she had been attacked by a dog and her leg hung lifeless for several days before the young couple who owned her brought her to the Sonoma County Humane Society where they gave her up because they couldn’t afford the cost of surgery.  As a one-year-old, she was in good health in spite of this trauma, so the doctors operated to remove the dead limb and neutered and micro chipped her at the same time.
Ali was two weeks out from that surgery when I met her. From that first meeting, I knew she was mine and I went home immediately to make the necessary plans for her arrival the next day. The first thing I did was change her name to Kali, which means black in . My spouse’s ex-wife’s name was Ali, and that just wouldn’t work, either for me or her.
Kali couldn’t survive outside with only one back leg, so she’s content to consider the inside of my home her entire world. She only once tried and succeeded in dashing out the front door. She scooted around the house and wound up in a parking area, bawling loudly. I lured her out into the open with wet cat food, and scooped her up into tightly clenched arms. She and I both were trembling. Ever since that day, she’s never been interested in going outside. I could leave the front door wide open and she’d just sit and stare at it.
Even now she’s quite skittish…hates loud noises, ice cubes rattling around in the ice tray, the sound of tinfoil being ripping off the roll, any sudden movements, boisterous guests, the door on the dishwasher being opened or closed or doing ANYTHING with plastic bags.  I gladly tolerate this behavior from her. She’s been through quite enough trauma.
But if I don’t shower or put my makeup on, if I have a grumpy day with nothing good to say or do, if I get too busy and ignore her or if I go on vacation and leave her for two weeks in the care of others, she’s always loving to me, happy to curl onto my lap, or lick my leg or (gulp) reach out a tiny paw to my cheek when I cry (seriously!).
I’d like to think I saved her, but when I look into her soft kitty eyes and feel she’s seeing into my soul, I realize she saved me. She saved me from never having felt that level of love from an animal friend.
She must know I’m talking about her. She just rubbed up against my legs. Then again, it IS dinnertime. Maybe that’s all it is. 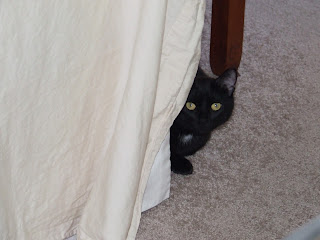